Welcome to the wonderful world of rowing, or "crew" as its crazed participants like to call it. You will no longer fail to answer correctly when someone asks you the famous trivia sports question: "In what sport do the participants cross the finish line while sitting down and going backwards?"

​As a crew parent, you will be expected to absorb mysteriously the meaning of a whole new jargon. (What's so bad about a crab? Is first seat in the front or back? What's an "erg" besides a unit of energy?) You will be asked to drive great distances and spend major amounts of time in unpredictable weather to observe perhaps one minute of a race -- and that minute neither the start nor the finish! You will be asked to provide some modest financial support and lots of emotional support (and food!) for a sport that does not appear to be particularly difficult or demanding, or even that rewarding for the participants. What's it all about?

A Short History of Crew as a Sport

Rowing as a team sport developed in the 1800's, notably at Oxford and Cambridge in England and at Yale and Harvard in the United States. The Harvard/Yale race, first held in 1852, is the oldest inter-collegiate athletic event in America. The first amateur sports association in this country was a rowing organization -- Philadelphia's Schuylkill Navy, in 1858 -- and the first national governing body for a sport in America was the National Association for Amateur Oarsmen, founded in 1872. 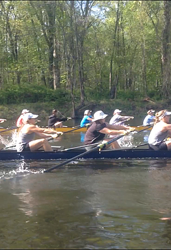 Rowing at Simsbury began around 1971 when some enthusiasts bought a used eight and hung it from slings near the Chart House (Pettibone Tavern). As the sport grew in popularity and moved from the hobby to club to varsity sport stages, the parents group, the Friends of Simsbury Crew, was incorporated in 1977 to support the rowers both emotionally and financially. The Paine boathouse, a barn-like two bay structure, was built in 1977 through the hard work of Simsbury parents. In 1988, an addition added changing rooms, a workout bay, a larger coaches' office, and a launch bay. Paine boathouse provides a storage area for rowing shells and indoor practice space during inclement weather.

While the individual rower does not need any fancy equipment to row, no padding, helmets, spikes or sticks, the team's equipment is quite expensive. Because of that expense, and the need for water for practices, relatively few public high schools offer rowing as a sport.

​The Simsbury High School crew has earned a fine record over the years. It has won several state, New England, and National championships. Simsbury has on four occasions, sent boats to England to participate in the Royal Henley Regatta, the oldest, largest, and most colorful rowing event in the world.